Which is the Better Choice: Prime Location HDB or Secluded Condos?

Property buyers often consider location as an important factor to consider before committing to a home purchase, be it a Housing Development Board (HDB) flat or a condominium. But how much of a game-changer is it?

You may dream of owning private property, but if it’s located in a secluded area (away from public transportation and other amenities), would you still buy it? Or would you rather go for an HDB flat in a prime location instead?

HDB flats in a prime location usually refer to those that are located in a mature estate, which is a residential area that’s over 20 years old. It’s often within walking distance of an MRT station and/or a major shopping mall.

However, that doesn’t mean they’re a common occurrence. The volume of transactions crossing the million-dollar mark had been under 80 units for the last few years, constituting around 0.3% of the overall HDB resale volume. It was only in 2021 that the number shot up to 174, and that’s only for the first 9 months of the year.

Generally large for its price

The million-dollar flats at Pinnacle and SkyVille are usually bigger in size, mostly 4- to -5-room units that are over 1,000 square feet (sq ft). They are also on high floors with a city skyline view.

Considering that most city-fringe and prime location properties are smaller in size and more expensive, these flats are well worth the price.

Pinnacle and SkyVille are also located in the central region, close to the Central Business District and Downtown Core. They are right next to public transportation and amenities, such as supermarkets, schools, malls, dining options and more.

HDB flats typically have lower Service & Conservancy Charges (S&CC) fees for HDB flats compared to condos, though the rates vary across town councils. It is payable monthly by lessees and tenants.

What’s not so good about prime location HDB flats?

For the longest time, buying an HDB flat in a prime location was likened to striking the lottery because it can be sold for a high price on the open market, as seen with the million-dollar deals at Pinnacle and SkyVille. As a result, they became too expensive for ordinary Singaporeans who are looking to buy a home for their own stay.

That’s why, on October 27 2021, HDB announced the Prime Location Public Housing (PLH) model to ensure that flats with prime attributes remain affordable. This means stricter ownership rules for future HDB flats in prime locations, such as the city centre and surrounding areas such as the Greater Southern Waterfront.

Some key PLH measures include the following:

Buyers of PLH flats will now have to wait 10 years for the Minimum Occupation Period (MOP), which is twice as long as the current 5-year MOP.

And though they can enjoy additional subsidies, a portion of their sale proceeds will have to be returned to the Board if they sell their flat in the future.

The quota for the Married Child Priority Scheme will also be adjusted and renting out the entire PLH flat is now prohibited; only rooms are allowed for lease.

These new measures significantly combat the lottery effect of prime HDB flats as it means more owner-occupier buyers will be able to afford them and fewer owners can make a profit upon selling.

Will the PLH model affect you?

If you previously purchased a prime HDB flat in say, areas such as Queenstown, the PLH model will not affect you.

It will only apply to new HDB flats launched from November 2021 onwards, with the BTO launch in Rochor as the pilot project. The new measures will also apply to the PLH flats when they are resold.

Exclusivity as a property investment asset

Unlike HDB flats, which people generally buy to live in, condos are more suitable as an investment asset. It can be a home for you to stay in or rent out, from which you can make passive income.

Moreover, there are lesser restrictions as to who can buy a condo, as both Singaporeans and foreigners are eligible to do so.

One of the biggest selling points of a condo is its exclusive and private facilities, such as lap pools, gyms, barbeque pits, tennis courts, spa rooms, gardens and more.

An upside to having access to these facilities is you won’t have to share them with as many people as you might with the facilities around HDB estates, such as playgrounds and soccer fields.

Of course, it depends on how large the development is. But in condos (and due to Covid-19), you can book a slot to use the gym or other common rooms/areas on your own time and leisure.

What’s not so good about secluded condos?

However, you will need to pay a higher monthly conservancy fee for the private facilities compared to HDB flats. It is usually around $250 to $600, depending on the development and the size of your unit.

Small for its price

Unlike the prime HDB flats, condos in secluded areas are quite small for their price.

According to Ohmyhome Super Agents, buyers used to be more concerned about psf prices as they are affected by the Loan-to-Value limit set by the Monetary Authority of Singapore.

But in recent years, they have become more concerned about the quantum, or overall price of a unit, instead.

Not as connected to the city

Residents living in secluded condos may be further away from an MRT station, but developments are usually within walking distance of a bus stop. Also, connectivity will improve over time as more MRT lines are being built.

The more secluded areas like Yishun and Punggol should only be less than an hour’s train ride away from the city.

Available secluded condo units you can buy within $900,000 to $1 million

There’s an available 2-bedder unit at Parc Centro condo, in Punggol, for less than $1 million:

And a freehold 2-bedder unit at Viva Vista condo is also available in Buona Vista, for about $1.1 million:

Other factors you should consider before buying a private property

Apart from location, the next big factor to look out for is property tenure. Don’t forget: a freehold private property doesn’t have a lease period you have to worry about.

So, if you were to buy a freehold condo unit as an investment and rent it out, you can do so for long periods of time. You can even pass it on to your kids without worrying about the lease expiring.

Private properties with a 99-year lease may be affected by lease decay, which is the process and effect of a property that’s running down its lease.

For example, owners of a condo with only 30 years left on its 99-year lease may have a difficult time finding buyers as their property is regarded as one with a reduced value due to the short remaining lease.

At the end of the day, whatever type of property you decide to buy depends on your lifestyle. What do you value more? Only you can answer this, with your priorities in mind.

If you need assistance with making a decision, let our Super Agents bring you through the whole process. 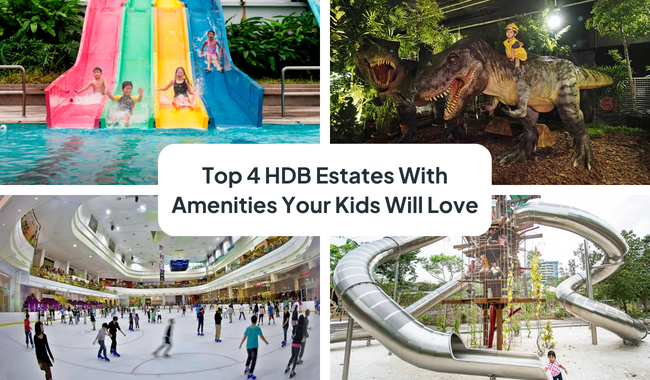